My patient the other day was recently diagnosed with AML and ALL, woah haven’t even seen those terms since nursing school… in word documents trying to summarize the chapters we would be tested on. I remember our professor saying this was important because the nursing care for someone going through it was vital. I think the ke word is: nursing care. As nurses, we often forget that.

Here is what you need to know:

A myeloid stem cell becomes one of three types of mature blood cells:

A lymphoid stem cell becomes a lymphoblast cell and then one of three types of lymphocytes (white blood cells): 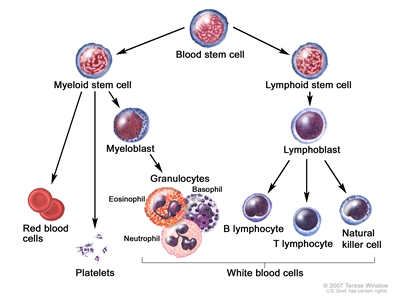 Adult acute lymphoblastic leukemia (ALL) is a type of cancer in which the bone marrow makes too many lymphocytes (a type of white blood cell). This type of cancer usually gets worse quickly if it is not treated.

– Kidneys can be damaged because:

1. Of the chemo’s direct effects during excretion

2. Accumulation of end products after cell lysis. (Remember, the chemo is killing cells

so lots of junk is going to be left over from that. Kidney has to get rid of it.)

– Also, cell contents are released into the circulation once they die. This can result in

he was being treated for aspiration, cancer metastasis, tumor lysis syndrome and sepsis.

and all I could do as a nurse was perform the tasks that would save his life like titrate his pressor requirements, keep his lactate levels low (sign of anaerobic metabolism), give him abx. But as you see, these are all medical interventions. As a nurse, I prayed for him to get better and for his wife to understand his prognosis. Also, to make sure his course isn’t complicated by pneumonia or pressure ulcers. I also wanted his sedated body to remain clean… You know just like how he would want it to be if he was still talking. He was later transferred to the MICU. I hope he makes it for just a little longer.